Change can be challenging, especially when it concerns a laboratory that has been using the same working methods for 55 years. Pathology Friesland however made an important decision and took the plunge in September 2010 with the purchase of the Tissue-Tek Xpress® x120. Since then they have increased volume as well as speed in their lab, meeting the current demands of their customers.

‘The work load is never-ending’ or ‘Help! I’ve lost track!’ The implementation of the new working method took quite some doing, but in the end , was well worth it. Until recently, all tissue specimens were processed during the night and about 650 cassettes would be deposited on the lab desk in the morning.

Currently, with the help of the Tissue-Tek Xpress x120, cassettes are being processed in a continuous flow throughout the day. The old situation also required the lab technician to complete all the paperwork once a day, but now it can be done after every batch. In the past, all the work would stop by 16:30, but today the Tissue-Tek Xpress x120 produces cassettes with processed tissue specimen on a continual basis.

It is an on-going process. In a way, we have all been given a new job. All the operating procedures have been changed, so that everybody benefits when everything is running smoothly. The lab technicians benefit because they have more peace and quiet in the department as they no longer have to deal with a morning peak.

The patients and specialists benefit because they have a quicker diagnosis. Some of the lab technicians were immediately positive about the changes, whereas others had to take some time to get used to them. In particular grossing was a challenge for us as the usual 3 to 4 mm had to be standardised to 2 mm for the Tissue-Tek Xpress x120. This needed some practise. Currently, I strive for a smoothly run lab by constantly informing and engaging everyone involved.

The ‘lab navigator’ was developed as a result of everyone trying to find out what could be improved. This turned out to be a good way to standardise the work procedures, as it gave us all a sense of direction.

All lab technicians now know where they stand, in both senses of the word. Each lab technician is given a route per daily period. When he has been given route B, for instance, he’ll either be cutting out prognostics excisions (PE’s) and small surgical material, or he’ll be in charge of registering them.

On each card he’ll find a reminder, such as “Don’t forget the new material” or “Let the biopsies dry for a short time”. After the lunch break, the lab technicians will follow a different route until 16:00, after which they will clean up and go home. There are nine different routes in total. 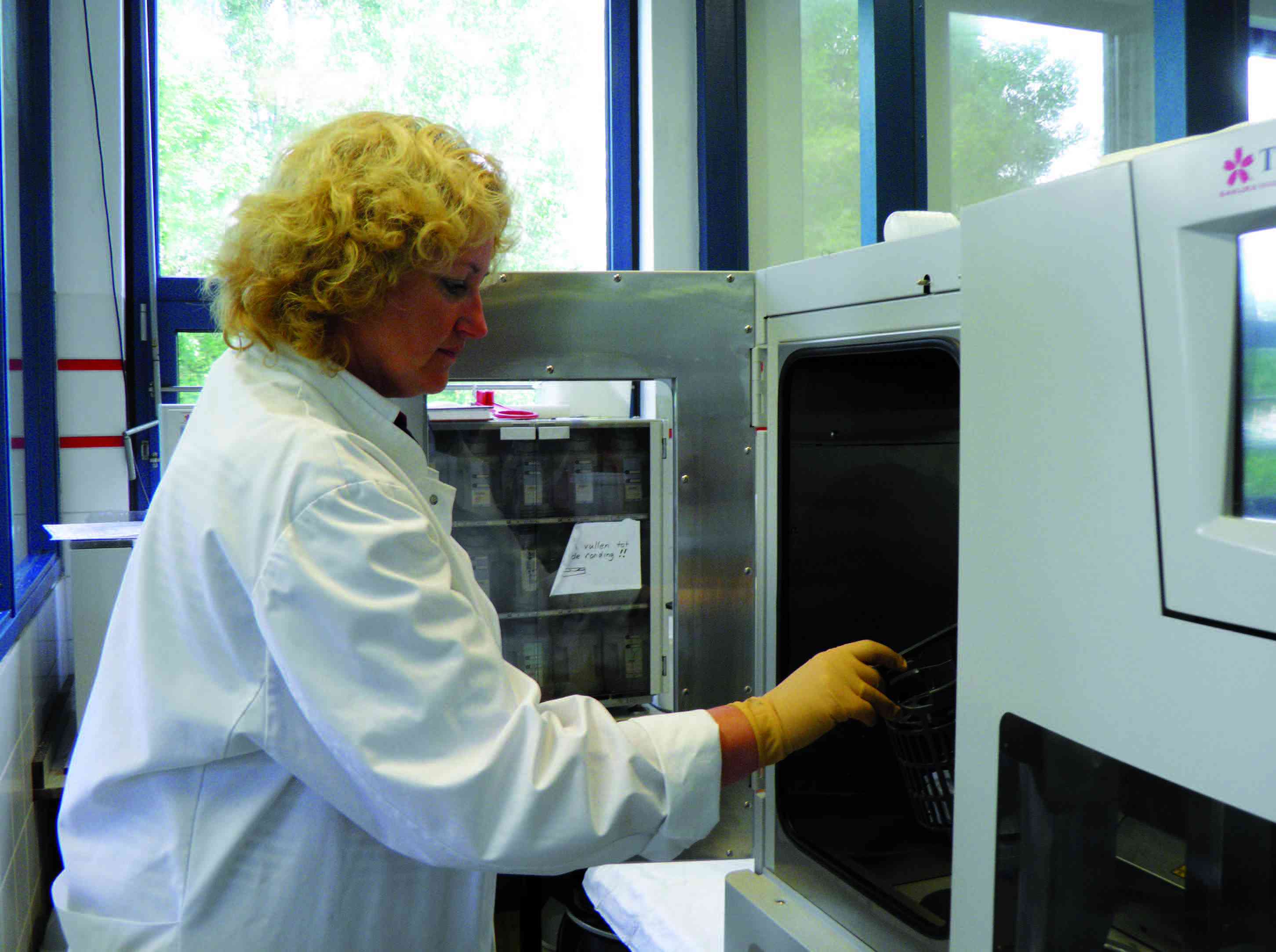 Pathology Friesland Foundation is in charge of the clinical pathological diagnostics for General Practitioners (GP’s) and nursing home GP’s in the region, as well as for five Friesian hospitals:

The foundation employs 65 people, of whom 26 are lab technicians, 12 are clinical pathologists, and one assistant pathologist trainee. Pathology Friesland is associated with the Pathology Department of Groningen University Medical Centre (UMCG) for the purpose of pathology training.

Our Sakura® VIP-processing machine was written off in 2009 and we were wondering how to continue. Every year we were given 6% more material to be processed, which currently amounts to about 650 specimens of tissue material. It took longer and longer before the pathologists could diagnose the material. As a result, the deadlines were being exceeded because we let ourselves be led by bulk processing.

Sakura suggested the Tissue-Tek Xpress x120 because of its uninterrupted efficient work flow and the possibility for quicker diagnoses. We started the process of inviting tenders together with other labs in the region and after we had visited our colleagues in Rotterdam and Germany to find out how the Tissue-Tek Xpress x120 was functioning, we were convinced of our choice.

How is her team getting on now, half way through 2011?

The department is now geared towards working with the Tissue-Tek Xpress x120. About 80% of all tissue specimens are being processed in the instrument. The pathologists receive the processed tissue specimens throughout the day now, which has resulted in a continuous workflow.

We are however planning on further improving the procedures. For instance, we continue to focus on how to standardise grossing and how to reduce walking distances on the work floor. In addition, we want to be able to offer the pathologists even faster service and more scope for quicker diagnoses.

How does the Tissue-Tek Xpress x120 work?

The Tissue-Tek Xpress x Series by Sakura Finetek ensures an uninterrupted and efficient work flow for lab technicians and pathologists. Working in batches is now part of the past.

Tissue specimens can be loaded continuously and are processed in just over an hour. In most cases it is even possible to come up with a diagnosis within a couple of hours. An additional advantage is that the use of environmentally unfriendly and harmful reacting agents, such as xylene, are no longer needed in the Tissue-Tek Xpress x120.

The pathologists of Pathology Friesland were also looking forward to the arrival of the Tissue-Tek Xpress x120 because the cassettes could be loaded every 15 minutes with a processing time of 60 minutes. The other machine would take eight to ten hours per run. We are held accountable for late diagnoses. In addition, emergency requests and requests for shorter runs are also rapidly increasing.

Consequently, has he become the main link between the lab, the pathologists and the management as well as a very important link, especially during the first few months. Fixing, which takes place outside the Tissue-Tek Xpress x120, did not give the desired result at first.

Van der Worp states that, “Particularly the intestinal tissue specimens showed too little detail. We solved the problem together with Sakura and now all fixing has been standardized.”

The fixing hurdle was cleared around January 2011 and its quality safeguarded. The focus is now on the workflow. In the meantime, the pathologists have been receiving most of the specimens throughout the day rather than in the afternoon alone.

But we haven’t reached our goal yet. We want to improve the controllability of the workflow by gaining insight into what kind of work needs to be done. We prefer to diagnose as much material as possible before lunch time, so that we have more time in the afternoon for oncological meetings in hospitals and the education of our interns. It is also important that we have more time for further comprehensive scientific research and for cases that need our extra attention.

In fact, we want to be freestanding of any fluctuations and possible delays in our lab.

Bert Benthem: About the beating heart of Pathology Friesland.

Conclusion: Well on our way to the right flow

Benthem is positive about the new beating heart of Pathology Friesland.

The Tissue-Tek Xpress x120 is helping to drastically change our organisation. We have already achieved a lot but we realise that there is still much more to be gained in the field of logistics. It takes time to abandon the concept of thinking and working in bulk, but by trial and error we have gradually been shifting our course. As members of the management and project team, we closely watch our colleagues and the way in which we involve them in the process.

Making full use of advantages

Benthem’s goal is to have made full use of the advantages offered by the Tissue-Tek Xpress x120 by the end of 2011:

•    All tissue specimens should be processed.

•    Have insight in the daily amount of work.

•    Have control of what goes in and comes out of the machine.

•    Emergency requests should be given priority.

•    Each employee should be involved at any time.

•    There should be a shift from bulk to flow working in order to have control over the material that needs processing.

This means that any given amount of specimens should be able to be processed and diagnosed within the requested time. The terms ambitious and revolutionary spring to mind with regard to Pathology Friesland. Quality is top of their list. Sakura Finetek and Pathology Friesland have formed a good team.

“[The Tissue-Tek Xpress x120] is very user-friendly. It only took a short while to master.”

Article translation by Korine van Veldhuijsen, published in VP Visi Nr. 6, 2011 in the Magazine of the Dutch Association of Pathology Technicians.

Sakura Finetek aids the patient journey in the field of histopathology

To contribute to the patient journey and the effectiveness of histopathology laboratories, we provide pathology professionals with instruments and solutions to help improve their workflow in the lab.

Discover why digital pathology is on the rise and how important the pre-analytics phase is in achieving its full potential in your lab.

One million cassettes at Pathologie Friesland

One million processed cassettes with the help of the Tissue-Tek Xpress x120: “It drastically improved our workflow and productivity”

Benefits of Digital Pathology and the importance of slide preparation.

Modernising pathology - the importance of pre-analytics in going digital

European Society of Digital and Integrative Pathology (ESDIP) held their 3rd workshop The Integrative Dimension of Pathology on November 24th, 2021. We have had the opportunity to invite Dr Juan Antonio Retamero, pathologist and consultant in digital pathology, to give a talk about modernising pathology and the importance of preanalytics in going digital.

Are you ready for digital pathology?

Within the field of pathology there are several new technologies becoming more significant, one of which is Digital Pathology. The transition to digital pathology requires preparation of your pre-analytical processes. This article dives into the benefits of good preparation.