Coverslipping in histopathology; a field study of archieved slides

There  is  a  high  pressure  on  many  laboratories  to   deliver   H&E   stained   slides   in   the   shortest   possible  time  cycle  to  the  pathologist.  Sakura’s  Tissue-Tek   Film®   Coverslipper   in   combination   with its Tissue-Tek® Coverslipping Film, an unique resin coated plastic film, eliminates the need for cover  glasses  and  liquid  mounting  media.  It  has  been proven to be the fastest and most productive solution  for  many  laboratories.  Next  to  the  high throughput (up to 1,080 slides per hour), the short drying time is regarded as a major advantage of the Tissue-Tek Coverslipping Film allowing faster archiving.

Pathology    archives    are    considered    essential    for  many  reasons  including:  further  diagnoses, audits  and  quality  control,  teaching  and  training,  epidemiology,   direct   evidence   in   litigation   and   research1.  In  most  countries  slides  need  to  be  retained for at least 10 years2. From this perspective, it is essential that archived slides remain in optimal condition over a long period of time.

Since  its  introduction  more  than  30  years  ago,  Sakura   Finetek   has   constantly   developed   and   improved  their  Tissue-Tek  Coverslipping  Film.  At  the time of this study, Sakura Finetek has already introduced  the  4th  generation  of  Tissue-Tek Coverslipping  Film  to  the  market  that  provides  superior  performance.  Up  until  today,  over  3 billion  slides  are  coverslipped  and  archived  with  Tissue-Tek   Coverslipping   Film   and   remain   in   perfect condition for many years.

The  aim  of  this  study  was  to  investigate  the adhesive capabilities of the 4th generation of the Tissue-Tek Coverslipping Film, over a period of at least 15 years.

The study was conducted by the Department of Pathology,  VU  University  Medical  Center,  in  the Netherlands.

Archived slides from a period of 16 years, from 1998   until   2013   coverslipped   with   Tissue-Tek   Coverslipping Film, were reviewed. The laboratory randomly  retrieved  20  patient  cases  from  the archive  for  each  consecutive  year.  Each  slide was  checked  for  its  adhesive  capabilities.  The percentage of film attached to the slide was rated according the specifications displayed in figure 1. 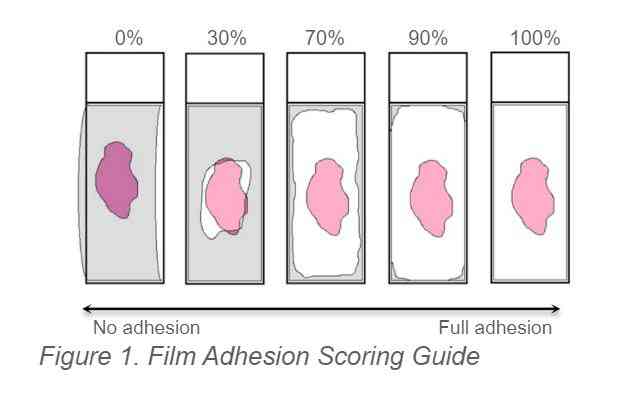 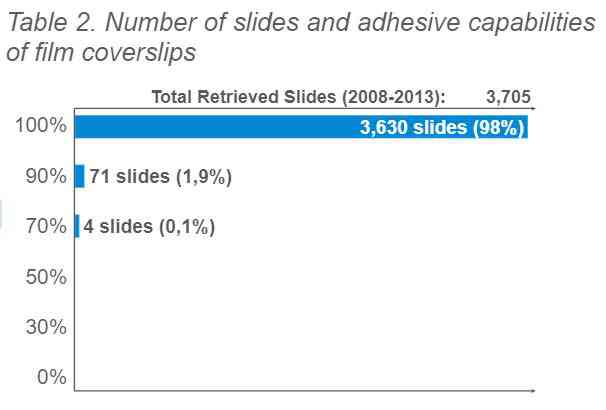 The  observed  de-attachment  meant  a  little  air  around  the  corners  and/or  sides  with  no  effect negative impact on diagnosis. The cause of this detachment  could  also  be  related  to  handling  errors like refreshment rate of xylene, drip rate, or filling level of the loading station.

From the results of this study can be concluded that Tissue-Tek Coverslipping Film has excellent adhesive capabilities over a period of at least 15 years.

Above results indicate that slides coverslipped with Tissue-Tek  Coverslipping  Film  remain  in  optimal  conditions over an extensive period of time. As indicated, a proper refreshment rate of xylene, drip  rate  and  filling  level  of  the  loading  station, as  well  as  storage  conditions  (as  stated  on  the  packaging), are important prerequisites to achieve above reported results.

This whitepaper presents a workflow observation performed at the Institute of Pathology at Vivantes Klinikum Neukölln. The impact of the implementation of SMART Automation instruments on the productivity of the laboratory was assessed. It was found that the introduction of SMART Automation led to a significant increase in overall productivity of the lab, with the greatest increase of 372% in the embedding step. In addition, this workflow observation highlighted the potential for a future in which increasing workloads can be dealt with, preparing the lab for tomorrow.

Compatibility of the Tissue-Tek Xpress® x120 with routine molecular diagnostics